TOKYO – The leaders of Japan and Australia said Tuesday they will bolster bilateral defense cooperation, agreeing in principle on a “landmark” pact to facilitate joint exercises as the key U.S. allies in Asia seek to counter China’s growing influence.

Prime Minister Yoshihide Suga and his Australian counterpart Scott Morrison voiced “serious concerns” about the situation in the South China Sea, disputed waters where Beijing is militarizing artificial islands despite protests from neighboring countries, and the East China Sea, according to a joint statement released after their meeting in Tokyo

China lays claim to the Japan-administered Senkaku Islands, a group of uninhabited islets in the East China Sea that it calls Diaoyu, and frequently sends coast guard ships nearby to assert their control.

The leaders “reconfirmed their strong opposition to any coercive or unilateral attempts to change the status quo and thereby increase tensions in the region,” the statement said.

Suga said Japan and Australia are “special strategic partners” sharing fundamental values such as democracy and the rule of law and would “cooperate to realize a free and open Indo-Pacific” at a press briefing with Morrison following their meeting.

The Australian prime minister is the first foreign leader to visit Tokyo since Suga took office in September and was also the first to hold phone talks with the Japanese premier.

At the press briefing, Morrison said the countries had taken a “significant step forward” in negotiations on a status of forces pact that began in 2014.

Formally called Reciprocal Access Agreement, the pact would streamline administrative procedures for Japan’s Self-Defense Forces and the Australian military to stay in each other’s country for joint exercises and disaster relief missions, as well as determine legal jurisdiction for any crimes committed by visiting troops.

The pact would be the first such one for Japan since a 1960 agreement with the United States making arrangements for the hosting of American troops under a bilateral security treaty.

Japan and Australia have been strengthening defense ties, this month holding naval drills along with the United States and India. China criticized the group, collectively known as the Quad, as the beginnings of a North Atlantic Treaty Organization-like alliance in the region aimed at containing it.

The leaders discussed the situation in North Korea, including its abduction of Japanese nationals in the 1970s and 1980s, and expressed hope for continued U.S. engagement in the region under President-elect Joe Biden, according to a Japanese government official.

Cooperation in tackling the coronavirus pandemic, which has killed more than 1.3 million worldwide and damaged the global economy, and climate change, was also on the agenda.

Morrison arrived in Japan on Tuesday morning and is set to depart Wednesday morning. He will self-isolate for two weeks upon his return to Australia, which has imposed strict travel restrictions due to COVID-19 concerns, according to Japan’s Foreign Ministry. 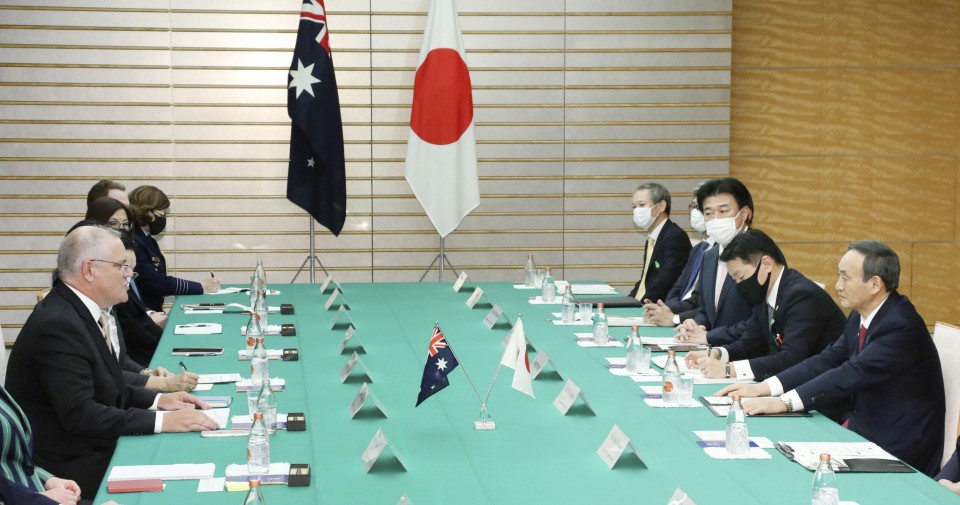